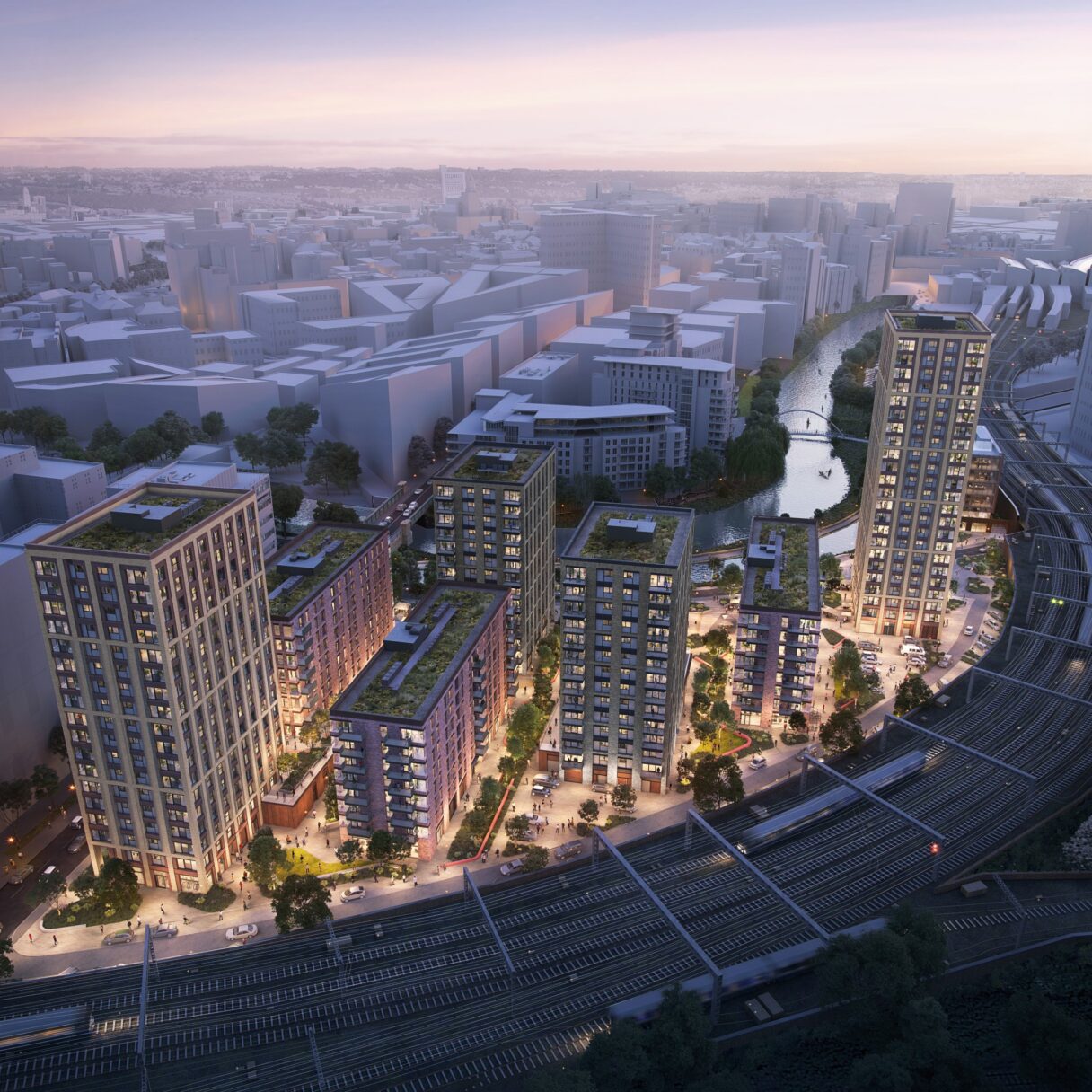 Plans to transform Globe Road in the South Bank area of Leeds, by investing £180m in a new five-acre residential neighbourhood of more than 750 homes for rent, have been submitted to Leeds City Council by the investment partnership behind Get Living PLC. The proposals unlock a redundant but highly-visible site, creating a new neighbourhood that continues the ongoing expansion of the city centre.

The application proposes eight residential buildings linked by a series of new public spaces and a new Hub building positioned overlooking the canalside. This new neighbourhood creates 783 homes for rent, including studios and 1-, 2-, 3-bedroom apartments, as well as family townhouses.

This bold new vision to bring the site back to life has been put together by the investors behind Get Living, the UK’s largest build to rent operator and best known for the transformation of the former London 2012 Athletes’ Village into a thriving neighbourhood now known as East Village.

The design moves away from creating a single monolith and is formed of a family of residential buildings – characterised by use of brick – including a 23-storey tower and a series of mid-rise buildings. This more granular approach allows for new pockets of public realm to be created in-between the buildings, with these spaces brought to life by a range of amenities – such as food stores, retails units and a gym – which activate the ground floor and streetscape.

These different elements have been carefully positioned to maximise daylight into the homes and the public spaces and to frame views of the city. Although much of the development is permeable and has a lively civic quality, residents will be able to retreat to communal terraces found on the first floor of the development and the townhouses benefit from private gardens.

A key part of the proposed development is the Hub building, a pavilion that sits on the waterfront to the east of the site. This lighter structure with glazed facades includes restaurant space at ground floor, with co-working space positioned above offering a workplace destination for small and emerging businesses.

Following public consultation with the local community, the lapsed planning consent granted to the previous site owner has been reconfigured to create a truly residential-led and green neighbourhood, which opens up Globe Road to the canalside and includes new public amenities.

Architects Sheppard Robson, who have worked on major development projects in the city including Wellington Place, drew up the plans to create inspiring new homes and sustainable public areas through the site.

The multi-million pound investment in Leeds is Get Living’s first venture in Yorkshire and will be its third location outside London. Get Living is the most established operator in the UK’s build to rent sector, with 3,000 homes across two London neighbourhoods; East Village E20 and Elephant Central in Elephant and Castle, and at New Maker Yards within Salford’s Middlewood Locks. Planning consent for a seven acre site in Glasgow was granted in December.

Build to rent homes are designed specifically for renting and are professionally managed. Build to rent neighbourhoods can help alleviate housing shortages in city centres, with homes typically brought to the market and occupied more quickly than in for-sale developments.

Rick de Blaby, Executive Chairman, Get Living said: “The housing shortage in the UK needs no introduction and we know from our own research that there is a demand for high quality and professionally-managed rental homes in safe, well-maintained neighbourhoods.

A neighbourhood of this scale commits us fully to the long-term growth and success of Leeds and our role will see us working alongside the Council and its own ambitious plans for the city. Our proposal is a significant investment and one we anticipate will support businesses that need to recruit and retain staff and, most importantly for the people of Leeds, one that delivers great homes within new public spaces.

We have listened carefully to local people to create these ambitious plans for a new green neighbourhood and we’re particularly excited that this proposal would see us opening up the site to the waterfront and creating new public routes along this stretch of the canalside.

This area to the south of the River Aire and the canal could be totally transformed with the introduction of modern, mid-market, safe homes in an attractive waterfront location. We’ve also taken seriously our responsibility that this new neighbourhood at Globe Road will be the gateway architecture for anyone coming into Leeds from the south, especially by train.”

“We commit to our neighbourhoods for the long term, building vibrant, safe and well managed places to live. More than 3,000 people now rent from us in East Village and, since we launched in 2013, we’ve helped foster a strong sense of community by supporting independent retailers, funding grassroots clubs and hosting free events. We are committed to bringing this neighbourhood-focused approach to Leeds.”

Get Living’s Globe Road neighbourhood sits within the South Bank area, one of the most significant regeneration opportunities in Europe with the capacity for over 4,000 new homes and commercial development to create 35,000 new jobs. Subject to planning consent being granted, work on site would start in late 2019.